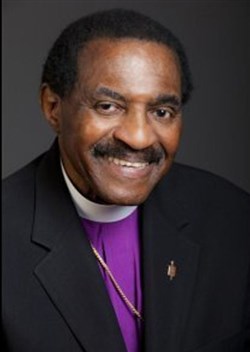 Life is rich because of its wholeness, its cycles and variety. Variety is not the “spice of life,” but life itself.” -- Introduction of Confessions of A Prairie Pilgrim by Bishop Woodie W. White

Bishop White was an influential force for BMCR as the first General Secretary for General Commission on Religion and Race in 1968. This was the same year that the National Conference of Negro Methodist met in Cincinnati, Ohio met and became a black caucus called Black Methodist for Church Renewal (BMCR).

While serving as General Secretary of GCORR or General Commission on Religion and Race from 1968-1984, he was elected to the office of the episcopacy in the North Central Jurisdictional Conference and assigned to the Illinois Area in 1984. Bishop White served for eight years and then assigned to the Indiana Area from 1992 until his retirement in 2004. Bishop White served as Bishop-in-Residence at Emory University.

Bishop White distinguished himself from other bishops by writing by writing a letter to Dr. Martin Luther King, Jr. on his birthday to share with him the state of the black community since Dr. King death on April 4, 1968. Is it not astonishing that year that BMCR was created and Rev. Woodie White selected as General Secretary GCORR occurred during this time in American history?

Bishop White wrote in his birthday letter to King that “the racial climate of this country has not gotten better because of the speeches filled with hatred and divisive, fear xenophobia, and the absence of the voice of the Church during these trouble times. Yet Bishop White writes they we need to keep the faith despite what we see and hear out there and that was he (Bishop White) remained hopeful.” The question I ask today: Have we kept the faith while staying hopeful?

Bishop White was a graduate of DeWitt Clinton High School in New York. He also graduated from Paine College, Boston University and he holds several honorary doctoral degrees from Rust College, Illinois Wesleyan University and Adrian college just to name a few.  Bishop White was also a writer, as well as a prophetic voice of the United Methodist Church and race relations. His writings include Racial Transitions in the Church, Confessions of A Prairie Pilgrim, and Conversations of the Heart.

Bishop White was an advocate for racism and race relations not only for BMCR but for the World Council of Churches.  We salute one of our pioneers and voices from our past that believed in a unity, peace based on Love of God and love of neighbor.