When You Have Jesus, You Have Enough 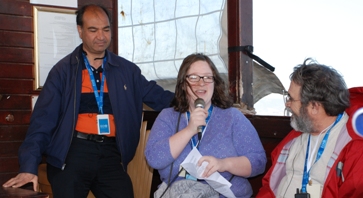 A morning boat ride across the Sea of Galilee combined with a morning devotional by Rev. Jessica Baldyga set the stage for the first day of pilgrimage for the IGRC Ordinand Class of 2013, Bishop Keaton and others traveling with the group in the Holy Land.

Baldyga, giving her devotion while a boat was criss-crossing the Sea of Galilee from Tiberias to Ein-Gev, selected the text from John 6 about Jesus feeding the 5,000 with two fish and five loaves of bread. "It was a rather meager amount to feed such a crowd, but when you have Jesus, you have enough," Baldyga said.

The message was particular poignant not only to those just beginning their ministry, but to laypersons and conference leaders, who could identify with times in their lives when one questions one's own abilities and whether they have what it takes to get the job done.

Even in the midst of the boat trip, the pilgrims were learning that not only were they gifted for their particular ministries, but that the day would be filled with reminders of that message as well Jesus providing teaching through his own life lived out in the various places visited. While some never experience rough waters on the Sea of Galilee, the water was somewhat turbulent on Thursday morning -- so much so that the tour guide changed course and made a direct west-to-east sojourn across the waters, rather than heading further north. While seasoned mariners did not consider the task difficult, the change of plans reminded the group that sometimes leaders are called upon to change plans in mid-course in order to stay on track.

The Sea of Galilee, the country's largest fresh-water lake, spans 13 miles north to south and eight miles east to west. Mentioned 51 times in the New Testament, the Sea of Galilee is mentioned 46 times, while the body of water is referred to as a lake, five additional times. The various sites which were part of Jesus' Galilean ministry, served as a unique classroom for learning.

The destination of Ein-Gev, located on the eastern shore, was the unintended destination, but it, too, served as additional lesson about the sufficiency of Christ. One of Israel's most historic kibbutzim (collection center), formed by Russian Jews that were expelled in the early 20th century. Ein-Gev is a communal arrangement in which members live together and provide for one another's needs. About 250 settlements or 5 percent of Israel's population, live the kibbutz lifestyle, underscoring the value of community for leaders when facing challenging times.

The tour guide also mentioned that was the region of the Gadarenes, which was highlighted in Luke 8. Jesus went across the Sea of Galilee in a day even worse than Thursday's boat ride. A storm developed and Jesus was sleeping, but when awakened calmed the storm and the disciples' reaction was one of awe. "Who then is this, that He commands even wind and water, and they obey Him?" Jesus' use of authority echoed words each of the Ordinands heard when Bishop Keaton laid hands on them last June and said, "Take thou authority..." 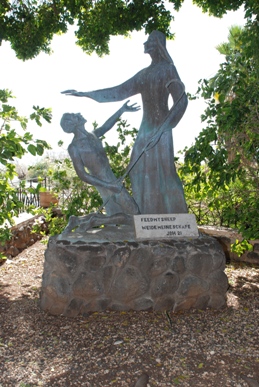 The group also was reminded of new methods are sometimes employed to enact change. Traveling north of Tiberias, the group stopped at Capernaum, where the ruins of Peter's house is located, as well as the ruins of the synagogue of Jesus. It was here that Jesus first directed his disciples to use the hook to catch fish instead of the nets. Faced with a tax bill, Jesus took a coin from the fish's mouth that was caught with a hook (Matthew 17:24-27). A change in technique or practice also occurred at Peter's Primacy, the place where it is believed that Jesus appeared to the disciples following the resurrection, where he instructed them to cast their nets on the other side of the boat and they brought in 153 fish.

Despite all of these sites, the foundation for everyone as disciples of Jesus Christ came in a reaffirmation of one's baptism.  Bishop Keaton and Rev. Janice Griffith presided over a reaffirmation service at Yardenit, the baptismal site on the Jordan River. Five individuals donned robes and actually immersed themselves in the Jordan River, while Bishop Keaton, making a cross on their foreheads, said:
"The Holy Spirit work within you,
that being born through water and the Spirit,
you may be a faithful disciple of Jesus Christ. Amen.

In The United Methodist Church, baptism is one of two sacraments (the other Holy Communion). Through baptism, we acknowledge:

The reaffirmation provided a reminder to what we believe as Christians living out our faith in The United Methodist Church and also the wellspring from which both clergy and laity respond to Christ's call for us to serve the world.

And faced with a daunting task, group members were reminded, when you have Jesus, you have everything you need.

The group also visited the Mount of the Beatitudes where the Sermon on the Mount was preached; Tabgya, site of the Church of the Multiplication where Jesus fed the 5,000 and a late afternoon trip to the Golan Heights, the area north of the Sea of Galilee which was captured by Israel from Syria during the 1967 Six Day War.