Blessed be the God and Father of our Lord Jesus Christ! According to his great mercy, he has caused us to be born again to a living hope through the resurrection of Jesus Christ from the dead, to an inheritance that is imperishable, undefiled, and unfading, kept in heaven for you.  --1 Peter 1:3-4 (ESV) 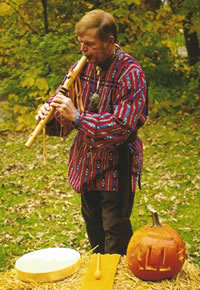 One evening as I sat around a campfire visiting with an elder in Oklahoma, he and I continued to visit long after the others had retired for the evening. I asked Will (the elder's name), "Why is it that our ancestors so easily converted to Christianity?" He looked at me and said, "Fire Crow I am going to tell you what is called the oldest story.

This story is over 2,000 years old. One morning as the people came from the place of prayer (the river where they had ritually cleansed themselves 7 times), a bright light appeared and out of that light stepped They Who Wore White.(The Cherokee had no word for angel so this description was used).

They Who Wore White took an elder out into the forest and said to him, "Do you remember when we were here 33 years ago. We told you about a special son of the Creator who was to born across the great waters and whose name is tsisa (Jesus). He is about to die a horrible death because of the sins of all mankind." When the elder took the message to the people they cut off a lock of their hair and tore their garments as a sign of morning.

When the yonega (white) missionaries came among the Cherokee it was like the late Paul Harvey coming and saying, "Now for the rest of the story." The message of the death and especially the resurrection was a marvelous message for the Cherokee. In response to that message, Cherokee was the first language the Bible was translated into in the Western Hemisphere.