Greetings from Africa University where today was "Open Day" -- a day when busloads of high school students visit campus and dream of a college education. 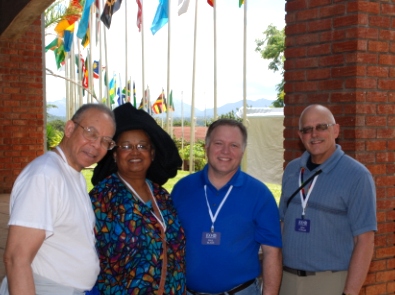 But it is also a day of dreams...of recalling dreams of the past and how they have been accomplished through God's help and extravagant generosity by persons across the United Methodist connection, but today's tour was especially noteworthy for those of us from IGRC.

Open Day is very much akin to recruitment days held at colleges and universities in which the institution puts its best face forward in trying to align its hopes of landing students with the dreams and hopes of the individuals.  Things are a little different in Zimbabwe, as the dream of a college education seems to be almost impossible and Africa University is the dream of many of these high school students.

Just as we are recovering from an economic downturn, Sharai, the information officer at Africa University, explained the economy hit rock bottom in Zimbabwe in 2009, with unemployment nearing 90 percent. However, despite the conditions, Africa University continued to operate with financial integrity and prudent leadership.

So what would be the sales pitch to give these high school students?

The vision of Africa University is "improved quality of life, peace and prosperity for the peoples of Africa through quality higher education that includes teaching, research, community service and leadership development."

Sharai said that graduates' employment fortunes really are based upon their home countries' situation: 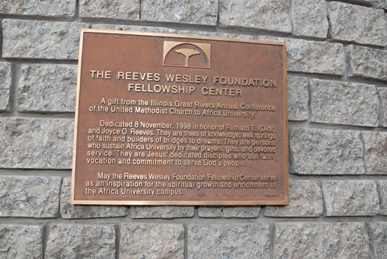 You don't have to look very far to see our conference's imprint on Africa University.  We talked with Sharai from the large meeting room of the Richard Reeves Wesley Foundation named in honor of longtime AU Trustee the late Richard "Dick" Reeves and his wife Joyce. Reeves was a member of Decatur First UMC and Joyce Reeves is still a member. Speaking of the couple, "They are trees of knowledge, wellsprings of faith and builders of bridges to dreams," a plaque reads outside the Student Center -- funded by gifts and offerings of the IGRC.

There have been other brick and mortar projects and a new Ubuntu Retreat Center, funded by the West Michigan Conference is set to open later this year.

But perhaps it is a time to shift focus and help some of those high school students reach their dreams.  For the past several years, we have been funding scholarships for AU students, but what would a big dream look like? What would it mean to really make an impact on the African continent? 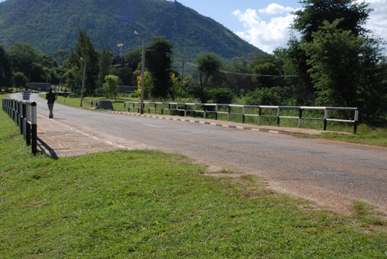 We have just raised $2.3 million for Imagine No Malaria -- only the second conference in all of United Methodism to do it and we did it without a major gift of $100,000 or more. This means we were all invested. What if we took a similar tactic to make sure that African students need not be concerned about the cost of an education if they will dedicate themselves to study and to ethical and moral service in their home countries when they graduate?  We might see a seismic shift on the continent, similar to moving the needle with Imagine No Malaria from every 30 seconds a person dies of malaria to every minute.

That's significant. With God's help, we can do it again with Africa University.