Giving Yourself to the World

OLD MUTARE, Zimbabwe -- For persons attending the 20th anniversary celebration at Africa University March 23, it was a time of remembrance of God's movement, a time of celebration of what the institution is achieving and a time of hopeful expectancy toward a vibrant future.

Dr. Roger W. Ireson, former general secretary of the General Board of Higher Education and Ministry, and Professor John W. Z. Kurewa, the school's founding vice chancellor and current E. Stanley Jones Chair of Evangelism at Africa University, each were conferred with a honorary Doctor of Letters degree during a nearly five-hour outside ceremony just outside the Richard Reeves Wesley Foundation Center. Both honorees were classmates at Garrett-Evangelical Theological Seminary.

"The world needs dream catchers and visionaries," said James Salley, associate vice chancellor for development in offering the two candidates for the conferring of honorary degrees. 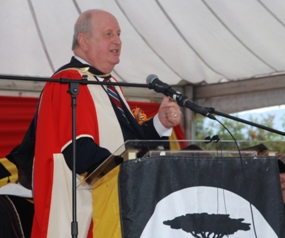 Ireson was also the service's keynote speaker and he used it as a time to reflect on God's movement in the formation of Africa University. "This didn't just happen. It was a work of God." And addressing the students, he added, "And it was established for you. Give yourself to the world and build a new Africa. and you will see the dream fulfilled."

Ireson wove together several stories about the early years of the university with a refrain, "Maybe it was luck. Maybe it was chance. But maybe it was a movement of God."

A couple of stories Ireson told involved personalities very familiar to the Illinois Great Rivers Conference and its predecessor conferences.

In pointing out similarities with the common track of Ireson and Kurewa at Garrett, Ireson also pointed out that Angolan Bishop Emilio J. M. de Carvalho and the late Bishop David Lawson (who served the Illinois Area from 1992 to 1996) were seminary roommates at Garrett-Evangelical Theological Seminary and how both men helped to shape the formation of Africa University.

Ireson said that Bishop de Carvalho had a knack for helping the group find a way when there was sharp disagreement. "He would look at his watch and say, 'it's time for tea," Ireson recalled. "One time, I looked at him and said, 'We aren't scheduled for a tea break for 35 minutes,' and the Bishop responded, 'it's time for tea.' And in the midst of taking time to drink tea and eat cookies, common ground was found in the midst of division."

"...to provide quality education within a Pan-African context through which people can acquire general and professional knowledge and skills, grow in spiritual maturity and develop sound moral values, ethics and leadership qualities."

"He would see me and say, 'We're going to build a university and we get to do it!" Ireson said. "When he retired from work, he requested as a retirement gift three wells and one of those wells is used by Africa University today."

Another humorous story came out of the Bridge to Dreams project. Reeves designed the bridge which was funded by gifts from the former Central Illinois Conference in honor of Bishop Woodie W. White's eight years of service in the Illinois Area (1984-1992).  "The bridge spanned a river and there was a python in the water. The students, knowing of Dick's efforts, affectionately named the python 'Dick.'" 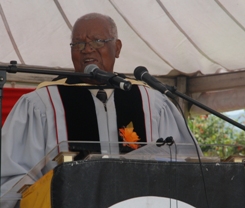 In introducing Kurewa, Salley said as the school's vice chancellor, he was "the drum major" for the university in recruiting many of the faculty which staffed the school when it opened.

Speaking of Kurewa's leadership, Salley quoted from Kurewa's sermon in chapel earlier in the week when he said, "If you are eating what you are sowing, the vision isn't for you."

Kurewa reiterated the hard work of visioning in his remarks when he noted, "If you are digging for something precious, you have to put in a lot of effort."

He told the story of an early student, Solomon Kupa of the Democratic Republic of the Congo, who walked, hitchhiked and even secured temporary employment for two weeks to earn funds to continue his journey to Africa University.

"In the early years, the school year started in March. In July, we get a call from the border saying there was someone there claiming to be an AU student and we encouraged him to come," Kurewa said. "After hanging up the phone, we decided the right thing to do was to meet him halfway but when we called back, they said he wasn't still there; the student had left running from the border when he was told to come on to school. We worked with him and he was able to begin class even though he was well into the semester. And we tracked him down on the road and picked him up in Harare."

A story was told about the necessity of moving a hut in order to develop the campus. Living in this hut was a family with an 8-year-old daughter. When the girl was asked what she wanted to be when she got older, she said she wanted to be a doctor so she could "fix hearts."

A total of 17 annual conferences were represented from three continents. Several conferences and individual congregations announced gifts for scholarships and in an interview earlier in the week, called the IGRC "a founding partner" of the school. He also recognized Bishop Jonathan Keaton, noting that the Grand Rapids District in the West Michigan Conference had raised $500,000 which was matched with a major gift for a total of $1 million raised during Keaton's tenure in the Michigan.

Salley observed, "Only God would move a bishop from a conference that gave $1 million to Africa University to a new area so that they can give $1 million."

"This donor believes that Africa must be invested in Africa University," Salley said. "It is then that you will see the continent transformed."

The service included several selections from the Africa University Choir and Jubilate, a choir from the Pacific Northwest Conference that also performed at the 1994 groundbreaking.