(Editor’s note: Bishop Jonathan Keaton is currently on renewal leave. He has asked his Executive Assistant, Rev. Janice Griffith to write this month’s column for The Current.) 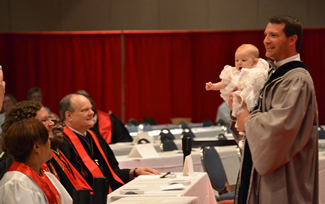 The occasion of infant baptism always invokes Kingdom dreams.  During the 2014 Service of Ordination and Commissioning, Bishop Keaton baptized Harper Jane Krost. My heart was strangely warmed as I watched Harper’s father carry her through the congregation as the soloist sang of God’s love for this precious child. We were all reminded again of the resurrection hope that is ours through Jesus Christ. I began to imagine all the ways that God would touch Harper’s life and bring her to maturity in Christ as one who helps build the Kingdom of God.

All those standing on the stage to be commissioned or ordained as clergy had also once been brought for baptism and were now living into the Kingdom dreams that were made possible as they were claimed as children of God and nurtured in the faith.  Harper’s father, Todd Krost, was among them. I wondered how God will work through Harper to dream Kingdom dreams and to transform the world. I wondered how God will work through those newly-commissioned and ordained clergy to dream Kingdom dreams and transform the world.

Dreaming Kingdom dreams is certainly not a new phenomenon. The churches across Illinois have baptized countless Kingdom dreamers across the years. Back in 1842, a son was born to Michael and Nancy Hartzell in a farmhouse at Moline.  The Hartzells brought little Joseph before God and the members of the Methodist Society for the sacrament of Holy Baptism.  Little did they know that Joseph Crane Hartzell would not only dream Kingdom dreams but that he would help bring to reality the dreams of many precious children of God. Even more, he would set the stage for Kingdom dreams to continue to blossom over the course of centuries to come.

Michael and Nancy Hartzell were ardent Methodists so it is not surprising that Joseph decided to pursue a call to ministry at a very young age. He graduated from Illinois Wesleyan University in 1862. After graduation from Garrett Biblical Institute, he was ordained in the Central Illinois Conference in 1866 and received his first appointment in Pekin.  In 1870, he transferred to the Louisiana Conference where he was appointed to one of the largest churches in New Orleans, Ames Chapel (later known as St. Charles Street M.E. Church).  In the aftermath of the Civil War, Joseph Crane Hartzell would soon become a well-known leader when his church advertised “free seating” – that is, seating no longer segregated by race. It is said that people were drawn to the church simply to experience the mixture of humanity seated together in the pews worshipping in unity as the people of God.

In 1873, Hartzell was appointed superintendent in the Louisiana Conference. For the next nine years, he gave direction to the evangelistic and educational work of the Methodist Episcopal Church during an important segment of the reconstruction era in the South. He later accepted an appointment to the Freedman’s Aid Society which played a key role in establishing more than 50 schools in the South that were open to all men, women and children.  While there, Hartzell continued to exert his influence in favor of the newly-freed slaves as well as the rights of free blacks.

At the General Conference of 1896, Joseph Crane Hartzell was elected Missionary Bishop to Africa where he served for 20 years prior to his retirement in 1916.  Some have said that he did his greatest work there in Africa as he laid the foundations of Methodism’s development across the continent.
Of timely importance to us in Illinois Great Rivers Conference is one specific “Kingdom dream:” In 1898, Bishop Joseph Hartzell stood on Chiremba Mountain above Old Mutare, Zimbabwe. At that time, it was called Old Umtali in rural Rhodesia.  Looking down into the valley below, he envisioned hundreds of African young people with books in their hands, running to school.  And he prayed to God dedicating that valley to the spread of the Gospel and to building the Kingdom of God.

Bishop Hartzell shared this dream with Cecil Rhodes, an executive of the British South Africa Company which owned the land. Hartzell successfully obtained the buildings at Old Umtali and a large tract of land for use as a mission station. Among the first institutions to be established at Old Umtali Mission were a primary school and an "industrial" school. Hartzell High School followed. And, Africa University would come nearly a century later.  It is the latest educational offering in fulfillment of Bishop Hartzell's Kingdom dream.

The amazing work of God through the Kingdom dreams of the baptized is exemplified through the life of Bishop Joseph Hartzell who claimed a vision for the valley below Chiremba Mountain. It has spanned hundreds of thousands of miles, more than a century of years, and countless lives.  And, what about the many people who have been inspired by the life and leadership of Bishop Joseph Hartzell?  These baptized Kingdom dreamers have multiplied the fruitfulness of this dream through their own vision, commitment, and gifts – people whose names are too numerous to mention.

Who could have guessed all this was possible as one tiny infant boy was baptized back in the 1840’s?   Yet, ultimately, it wasn’t about Joseph Hartzell at all, but about God who claimed Joseph’s life for making disciples of Jesus Christ for the transformation of the world and for Kingdom dreaming.

Today, more than 5,000 Kingdom dreamers have graduated from Africa University. They are making disciples and transforming the world. These graduates are doctors and nurses, engineers and teachers, social workers and government leaders. Through them, Kingdom dreams are becoming reality.

During Annual Conference, we officially inaugurated the Making Dreams Possible Campaign to create an endowed scholarship fund for students at Africa University. We, the baptized from across the Illinois Great Rivers Conference, have pledged to share in the Kingdom dreams of God’s children across the continent of Africa, not just for a few years but for generations to come. I’m already praying about how much I’ll contribute.  I already know that one way I’ll contribute is to make a gift in honor of each “Kingdom dreamer” whose baptism I witness between now and when we reach our goal.
Harper, that means my first gift is in honor of you!  Dream on, Harper, dream on!   It’s never too early to help a child of God make a difference for the Kingdom!