Don’t fall for the confirmation bias 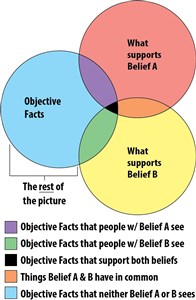 The Confirmation Bias is a type of cognitive bias where we, as human beings, listen more seriously to information that confirms the beliefs we already have while information that supports the opposing belief is treated with skepticism. Confirmation bias is most common when discussion surrounds an emotionally-charged topic. It is similar to going through life with blinders on; you only see part of the big picture. If both sides of a topic have blinders on, is anyone viewing the entire picture with all the objective facts if each of us see only what we want to see?

“What the human being is best at doing is interpreting all new information so that their prior conclusions remain intact” (Warren Buffet).  We as a species simplify complex situations as an adaptive survival mechanism. The other option, constantly evaluating our worldview with the new information we can be exposed to everyday would be exhausting. So instead of re-analyzing and diversifying our worldview all the time, our human instinct is to make a decision and strengthen that belief. Changing our mind to keep up with new information is a difficult evolutionary task.

Neil deGrasse Tyson said, that “One of the biggest problems with the world today is that we have large groups of people who will accept whatever they hear on the grapevine, just becase it suits their worldview …… [even though] it would not take much effort to establish validity in most of these cases… but people prefer reassurance to research.”

Concluding with the idea that “the eye sees only what the mind is prepared to comprehend” (Robertson Davies), I ask the question: How can we counteract our human tendency to interpret the world through a distorted or biased lens? Some strategies are more effective than others, Here are some important steps and tips:
1.    Knowing that confirmation bias (and more other biases) exists is an important first step. Intentional change begins with awareness.
2.    What are the objective facts that support the other viewpoint or belief in the discussion.
TIP: Emotional decisions are made quickly, effortful, rational decisions are made slowly.
3.    Be open to adjusting your position based on information presented. Sometimes your initial expectation may be neither 100 percent right nor 100 percent wrong. Look for the middle ground and for how you can adjust your position.